This decision came in response to new CDC guidance suggesting that more than 70% of the population no longer needs to wear masks indoors because they are in low-medium risk areas. Children are also included in the new CDC guidelines.

Despite the statewide decision in response to new data, Hochul will still allow counties with higher case rates to keep or remove the mandates.

“More than a million New York City schoolchildren will return to class tomorrow after a week off. At the end of this week, we will evaluate the numbers and make a final announcement on Friday. If we see no unforeseen spikes and our numbers continue to show a low level of risk, New York City will remove the indoor mask mandate for public school children, effective next Monday, March 7. Our schools have been among the safest places for our children since the beginning of the pandemic, and we will continue to make the proper public health decisions to keep our kids safe, including making masks available for any child or school staff member who wishes to continue wearing them.”

In addition to the statement, Adams also announced that the vaccine passport requirements for dining, gyms, and other entertainment venues would also be lifted if no surprises or spikes occur within the city. The mandate will, however, remain in place for healthcare settings and other high-density state facilities.

The State was quick to attribute the mandate change and decrease of cases to the high vaccination rates, mask mandates, and numerous other restrictions. Hochul states that “because New Yorkers have stepped up, we can confidently remove the statewide mask requirement in our schools. 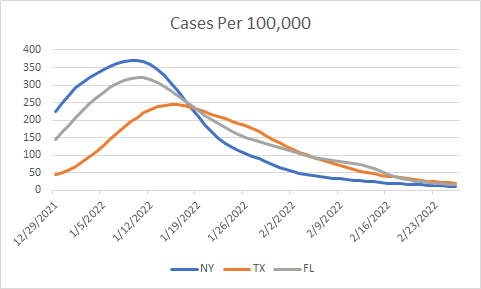 Perhaps New Yorkers should be asking their governor why it took so long for them to release their tyrannical mandates when other states achieved similar results with far fewer restrictions on individual freedom.

Americans can increasingly enjoy their freedom of movement again as Democrat strongholds finally realize that their COVID mandate power trips can no longer be justified. It is about time children are allowed to learn in face-to-face environments, uninhibited by pointless mask mandates.